Education during the pandemic - Guernsey College of Further Education

The Edge Foundation has been running the Island Education Network since 2018, bringing together a range of islands around the British Isles, Channel Islands and British Overseas Territories to discuss education in an island setting. 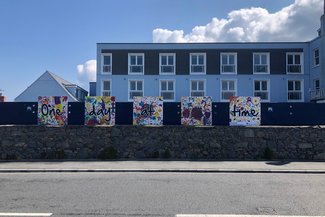 Working together, Edge and SCELG want to support colleagues working in island education to tell their stories. In the second in this series, Jennifer Long, English & Maths lecturer at Guernsey College of Further Education shares her experience of education during the pandemic.

The Bailiwick of Guernsey is a scattering of small, beautiful islands including Guernsey, Sark Herm, and Alderney. We are one of three British Crown Dependencies, which means we follow the British Monarchy but are not considered part of the British Isles or beholden to the British government. This means, under the leadership of the States of Guernsey, the Bailiwick has had a very different response to the Covid-19 pandemic.

Initially, the idea of a world pandemic seemed both very far away and very frighteningly close. With a population as small as Guernsey's, everyone knows each other and crosses paths in numerous ways: there are few schools, only two post-16 institutions, and 4 or 5 big supermarkets. If the virus were to strike us without adequate preparation, our cross-pollinating populace would be open to mass infection and loss.

Fortunately, from a ground level perspective, the States of Guernsey were in control from the moment our first case was identified on 9th March. Enter Stage Right: Dr Nicola Brink, Guernsey's Director of Public Health. An enthusiastically knowledgeable virologist, she works based on hard evidence and logic. On Stage Left: Heidi Soulsby, who at the time was the leader of Guernsey's Health & Social Care political committee and someone who listens, learns, and applies the information she is given. At Centre Stage, Guernsey's Chief Minister, Gavin St Pier, who was able to lead steadily from the front without panic, without visible signs of stress, and with the ability to listen to the two very qualified women sitting beside him. Obviously, the Covid-19 response had many more hands on deck than that, but between these three, Guernsey spear-headed a response that kept the pandemic firmly in check.

The start of lockdown - moving online

After a steady attempt at prevention through February, 25th March saw several cases of community seeding identified, and the island went into a complete lockdown. Non-essential businesses and all forms of hospitality were closed, and educational facilities were shut to all but the children of essential workers in healthcare, education and infrastructural providers. Most importantly, the borders were closed to all non-essential travel.

Where possible, education moved online. For a college in the Further Education sector, this was a steep challenge for many subjects, especially those where achievement was reliant on practical assessments, for example hairdressing or the construction trades. All teams responded brilliantly. Leadership sent updated information twice daily; laptops, internet dongles and other necessary equipment were loaned out to both teaching staff and students in order for them to access the internet at home; teaching staff previously terrified of employing technology in the classroom took the chance to embrace new techniques, apps and programmes in order to do their very best for the students who now had to access everything from home.

For some subjects, such as my own specialisms in English and maths, moving online could be considered less challenging than more vocational topics. Being able to interact with and engage students with most topics was almost 'business as usual'. The main difficulty was being unable to see our students' faces to judge their levels of interest and understanding - and getting them to log on in the first place! Maths was more difficult, with more visual topics such as scale drawing proving a challenge, but students proved exceptionally understanding and patient with the fumbling of teachers learning their way through alien methods.

Pastoral staff throughout the college worked almost 24/7 to keep in touch with the most vulnerable of our cohorts, so that even those who didn't log on and engage with lessons knew they were cared about and they were being thought of. In a sector where, statistically, there are more vulnerable students than in any other, lockdown could have proved a disaster to students who already struggled to attend or motivate themselves or students whose mental health relied upon having their friends and teachers around them as a support network.

All in all, although we could not be said to find fantastic success, we certainly did the best we could with the chips we'd been given. Of course, we cannot say that we have escaped unscathed: as with the rest of the world, mental health and the recovery of the Bailiwick's economy are two great obstacles to surmount. With a new government elected in October and a change of leadership at the top, there are many questions as to how the island will now proceed. However, the #GuernseyTogether campaign ensured islanders of all age groups and walks of life were able to prove resilient and supportive of each other. With a combination of fresh air, beautiful scenery and a sun whose hat was quite firmly on, life whirred on.

The decision to go into lockdown might not have been great for the economy (isn't that what everyone says?) but it is not difficult to theorise the number of lives that were saved. The quick actions of those in charge ensured the rapidly rising number of cases topped out and, by the latter stages of April 2020, Guernsey was able to start easing out of lockdown in a gradual, supportive fashion. Those students who badly needed to complete practical assessments were welcomed into college on a timetabled basis with their lecturers and thus were able to achieve their qualifications; some English and maths exams were able to go ahead in early July for those who were unable to get centre-assessed grades in May.

For a time, 129 days in fact, we had no cases at all. We had, to all appearances, eliminated Covid-19 from the island. Life as we knew it returned to a close simulation of normal: we had music festivals; we were able to hold Europe's only in-person PRIDE celebrations and a Black Lives Matter protest on the very first weekend out of lockdown. Attendance was huge and the atmosphere was positively vibrant. Restaurants, hotels and bars have been able to operate without masks, and school cohorts were able to return in September without the additional measures needed in UK schools such as wide-open windows, class 'bubbles', or plastic screens to separate teachers from their groups. Our children were able to costume-up and celebrate Halloween properly: with knocks on (approved) doors and sweet treats to nibble on throughout half term.

Although we cannot say we are still free of the virus (at the time of writing, there are 12 cases identified on the island), the atmosphere is still one of control and forward planning. There are silver linings to the travesty of this year: teachers are more comfortable with online delivery and, if necessary, would be able to return to that method of teaching and expand on their knowledge with more confidence than before. Some have taken the learning they gained over the lockdown period and brought it with them into their classroom practice, a development which has undoubtedly benefited their groups.

Most importantly, students and their parents across the island are aware that, no matter the difficulties we may face going forward, we will do our best to support them and ensure they get the education they need to succeed.

At the time of publication, Guernsey has recently emerged from a second lockdown. This one was much shorter, albeit more of a shock to the system after so long a period of confidence and freedom, but the hard work and practices trialled through the first lockdown stood true to the test of the sequel: online learning got off the ground within 24 hours of closure.

Over 70 laptops and WiFi dongles were issued to students who lacked those devices at home, and the resulting percentage of student engagement was much higher than last year. Since the cautious reopening of educational facilities, staff in schools and colleges have had weekly PCR tests (brain-ticklers!) to ensure as much confidence and safety in their workplaces as possible.

Now, with the welcome breather of the Easter break behind us, we look forward to a summer term of Lateral Flow Tests, vaccinations, and Teacher Assessed Grading – and the traditional Guernsey sunshine, of course!